The “Our World Is Not For Sale” (OWINFS) network is a loose grouping of organizations and social movements worldwide fighting the current model of corporate globalization embodied in global trading system. OWINFS is committed to a sustainable, socially just, democratic and accountable multilateral trading system. 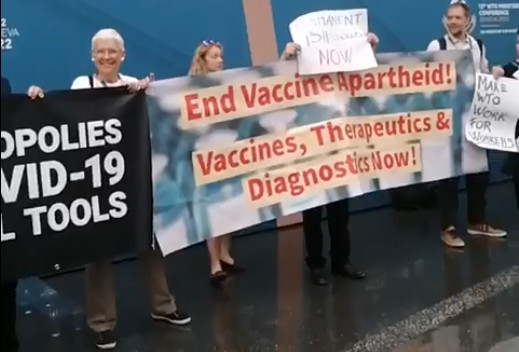 The global health community, civil society around the world, legislators, international agencies, former heads of state, and over 100 WTO members support the waiver on intellectual property rules on COVID-19 related treatments, diagnostics, and vaccines to end the pandemic. The TRIPS waiver can be agreed at any General Council meeting and does NOT require a Ministerial. This is the ONLY agenda that WTO Members should be focusing on at this time.

Comments on the leaked draft text of discussions facilitated by the Director-General of the World Trade Organization with respect to the TRIPS Waiver proposal.

WTO fails to finalize TRIPS waiver and response to pandemic.

WTO Response to the Pandemic

Having refused for over a year to agree to the waiver that would resolve the pandemic, trade negotiators from the EU, Switzerland, Canada, the UK, and a few other countries - representing the interests of Big Pharma over their own citizens and global public health - have invented a diversionary tactic called the “Walker Process.” Allegedly a “WTO Response to the Covid-19,” this process is designed to try to save the WTO from its increasing irrelevance and illegitimacy, by drawing attention away from the WTO’s failure to remove the barriers of its Trade-Related Intellectual Property Rules (TRIPS) agreement to resolving the pandemic.

WTO: Anti-diversion provision in waiver decision text emerges as the next flash point.

Open letter to WTO Director General and all WTO Members Against the Sham “Walker Process” and in Favor of the TRIPS Waiver: English, Arabic

more on WTO’s response to the pandemic…

After being twice postponed, the 12th Ministerial Conference of the WTO has now taken place 12-16 June 2022 in Geneva.

Don’t blame developing countries for lack of consensus at the WTO! (15 June 2022)

Civil society protest at the entrance of the WTO 12th ministerial in Geneva. (13 June 2022)

NGO statement on the WTO decision to retract their previously granted access to the Ministerial Conference on its opening day. (12 June 2022)

Online press conference with civil society and academic experts on the stakes for MC12. (recording, 10 June 2022)

Why what’s going on right now at the WTO matters: English, Spanish.

Over 200 organizations from 67 countries say: “Fundamentally transform the WTO: The WTO’s own policies have caused its existential crisis, which the COVID-19 crisis only amplified”: English, Spanish, French.

WTO members are working to finalize new disciplines on Fisheries Subsidies at MC12. However, many members, abetted by the WTO Director-General, are trying to ensure that these exclude development considerations which are part of the mandate. Developing countries - which have not contributed to the global collapse in fish stocks - need fisheries for their livelihoods and for food security.

What does the WTO Fisheries Subsidies Agreement mean for sustainability and development? (17 June 2022)

Special and Differential Treatment takes a beating in the new Draft Fisheries Text submitted to Ministers for WTO MC12. (11 June 2022)

Fisheries subsidies negotiations towards the WTO’s 12th Ministerial Conference: Considerations for developing countries and LDCs. (27 May 2022)

Letter from over 80 national and global fisherfolk and development organizations in favor of a pro-development outcome on fishing subsidies at MC12: English, French.

Off the Hook: How the big subsidisers are avoiding responsibility in the WTO fisheries subsidies negotiations.

Rich countries have blocked the development agenda since the founding of the WTO, and now are waging an assault against existing flexibilities.

Looking towards WTO MC12: What’s on the table for developing countries and LDCs? English, Spanish, French.

UN SR on the right to food - A reform of the global trade architecture and the AoA must for dealing with food crises.

Pro-corporate governments at the WTO are attempting to pursue a failed agenda of WTO expansion. Developed countries are attempting to undermine the core fundamentals of the WTO's mandate as a multilateral institution and alter decision-making procedures by using MC12 to normalize the “Joint Statement Initiatives (JSIs)” launched at the Buenos Aires Ministerial and henceforward.

WHAT’S COOKING FOR MC12? Two processes that could reshape the WTO in the interest of the most powerful: English, Spanish

Why the Joint Statement Initiatives Lack Legal Legitimacy in the WTO, by Law Professor Jane Kelsey, a rebuttal to a previous document by Hamid Mamdouh, “Plurilateral Negotiations and Outcomes in the WTO.” Resumen en español.

In addition, there are JSIs on environmental issues and on gender and the WTO. Rather than being progressive calls for putting planetary sustainability or gender equity above commercial interests, these declarations are attempts to push a failed liberalization agenda — “old wine in new bottles”.

Investment Facilitation Joint Statement Initiative: No home in the WTO

Certification of GATS schedules and the plurilateral reference paper on services domestic regulation.

Some countries are pushing for anti-development, anti-public interest and pro-Big Tech rules in the WTO under the guise of “e‑commerce.”

Clash of narratives on data flows between UNCTAD, US & WTO.

Digital Trade Rules: A disastrous new constitution for the global economy written by and for Big Tech: English, Spanish

E-commerce proposals at the WTO: a recipe for corporate greed